Nothing has changed for years with the production of pure maple syrup. The process is the same. Tap the trees for sap, collect it in a bucket, boil it down until it makes syrup. There's nothing better tasting than pure, fresh from the tap, just made, maple syrup from New Hampshire. Maple Sugar Weekend is one thing that many people from New England can't miss.  There is a variety of samples, including maple covered almonds, maple fudge, maple syrup on waffles or pancakes, maple cotton candy, and maple sugar candy. It's all good. 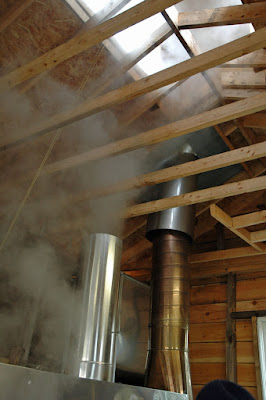 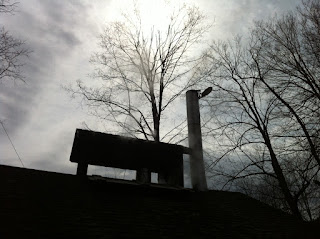 It's only one weekend a year, usually cold, snow covered and slushy. Today was cold, but not one flake of snow. Just the buttery, smokey smell of the syrup boiling in the sugar house.  (Hard to see but the steam is bellowing of out the stack. All of the forest surrounding this place smelled like syrup.) 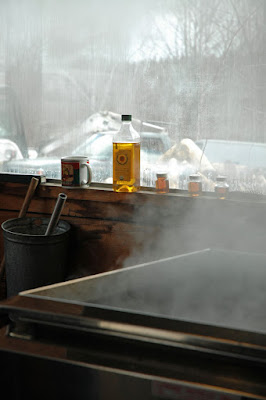 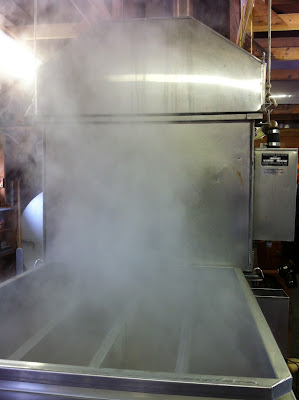 When my children were very young, I started buying pure maple syrup from a health food store in Illinois. Apparently, there was an older gentleman who made maple syrup and would drive down from Wisconsin to sell to a number of stores in the area. After buying a quart once, and we consumed it faster than it took me to buy it, every year after that I bought a gallon. A whole gallon would stretch out for nearly half a year. When I saw prices increase from one gallon to the next, I began buying two at one time. Fresh, just made maple syrup from Wisconsin. 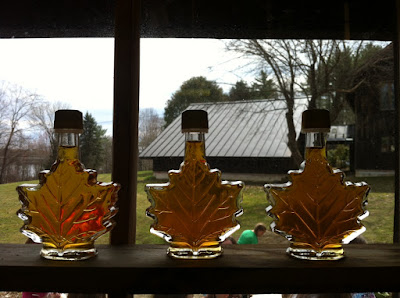 Now, unless you think that we just sat around sipping syrup, there were a few basic ways that I used it. One was obviously for breakfast with pancakes, crepes, waffles or french toast. At Thanksgiving, I almost always substituted the corn syrup for maple syrup in the pecan pie recipes. Delicious improvement. I would also use it if I made sweet potatoes (rarely) or homemade granola (even rarer).

For the most part, it was a breakfast delicacy. However, with the purity of maple syrup, not just any pancakes would do. After experimenting with a variety of mixes (once I was over the idea that I had to always make it from scratch) I discovered that Aunt Jemima had a whole wheat mix that resembled the scratch version I usually made. Voila. No more measuring all those ingredients. No guilt, it was healthy.

Now, my version of those same pancakes contains an added two scoops of protein mix, a scoop of flax meal, and sometimes a couple spoons of yogurt. Really good, and you can immediately feel the energy that last for most of the day. 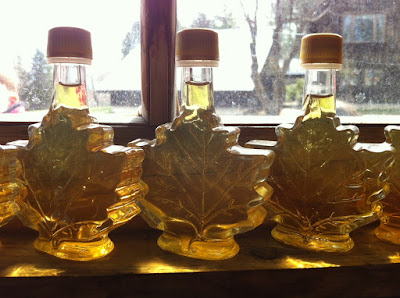 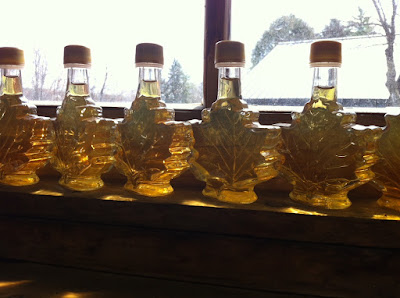 So, this year, I added to my supply of maple syrup that's on the shelf (no, the shelves in the picture are at the sugar house...not my house). Consumption rate is much slower, but we savor each and every serving. It's not uncommon that I end up giving these as gifts, it really is a little part of New England that's fun to share and a part of my philosophy for providing good wholesome food for the family. So, here's to another year of looking for more creative recipes for this nectar of the gods! 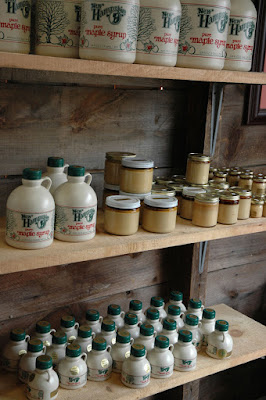 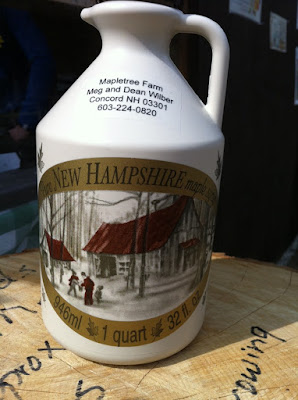 Without even realizing it, my daughter has given me a very big gift. Being an avid reader, she is never without something new and exciting to read. A while ago, she told me about this author that she really loves, Jen Hatmaker. Never heard of her. Never heard of her books either. But she has a new one out called "7." She told me about another awesome book, Breaking Free by Beth Moore. (But that's another story). Anyway, I decided to download 7 when it was only $7 on the Nook. A year from now, I venture a guess that it will have been the best $7 spent this year.

The basic premise is that it's an experiment that Jen underwent with her family to rid of excess. Excess of food, clothing, wasting time on electronic devices, etc. She spent an entire month, four weeks, living by a strict rule of seven, 7 food choices, 7 articles of clothing, etc. And it wasn't just about what was absent in those months, it's about what filled the space instead. Since I haven't finished reading the entire book yet, I'm assuming that it's an exercise in recalibrating ones inner self as to what is truly important, about controlling quickly shifting priorities and encompassing only what is significant and meaningful. It's also about learning to do life with less and allowing what should be more in your life to emerge, naturally, organically, spirit-led.

Actually, my daughter gave me two gifts. First is the book. Amazing. Thank you. The second, is to join her on this journey. How precious it will be to share this experience with its highs and lows, its radical, although creative elements, its plethora of questions and answers, its precious lessons learned and the emotional wrecking that sure to happen. (Being the empathetic - really, ultra sensitive person I am.) Truly, I've already been blessed, by her simple request.

If you haven't heard of the book, here's a short video. And her website.
http://jenhatmaker.com/