What begins as a good idea, soon becomes a delectable dream and always, always sends me back to 1985. It never fails. Seriously, when do lessons of the past stop being something that is emotionally or consciously attached to a present day activity? And something as simple as....making cookies.

When my children were 4 and 1, we lived next door, on Lilac Drive, to a nice young family. The mom's name was Julie and she had a son named Justin. We would speak on occasion, the kids would play out in the sandbox that Justin's dad made for him, and we would talk about planting daffodils in the yard. Just the usual stuff. Justin, even though he was only 2, was a bit of a "rough-house" and would always test Julie's patience. They would be out playing for a while, but soon after, Justin would have a melt-down of some sort and they would have to go in. Sara and Chris would continue to play in the sandbox with the toys. But I could tell that Julie liked the adult mom-to-mom talks. Occasionally, we would bring our iced tea outside, sit in the sun and watch the kids play while we chatted for a long time. It was nice and they were nice neighbors.

One particular day, as they were heading inside, Julie said to me, 'hey, you guys should come over later and we'll make cookies.' I thought, great, I love to make cookies. So we planned to meet up in the afternoon and make chocolate chip cookies. 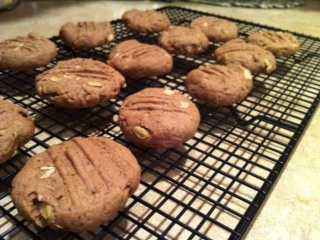 And show up we did. Got those cookies made and I felt so good helping a neighbor do something she needed help doing.  Finding a time to even make cookies is difficult with a two year old. And if I remember right, she was pregnant with their second child.  So, helping her bake something up, was nothing but joy for me. The next question she asked me, took me by surprise, 'should we make some tea to have with the cookies?' And I probably had somewhat of a puzzled look on my face, and I remember the words that came out of my mouth were, 'you mean you wanted us to eat these?' I'm not sure what that sounded like to her but to me I was confused. You mean I could go next door to my neighbors house, help her make cookies and sit and enjoy them with her, too? I wanted to cry.  I seriously didn't know what to make of that. Accepting the invitation, we stayed and helped them eat the cookies.

Every time I make cookies, I think of that moment. Not sure why, as I stir the butter and sugar together by hand until it's creamy, then add the vanilla extract and other ingredients, why does it take me back to Lilac Drive and that awkward feeling about eating the cookies? Obviously many years have passed and neither of us live on that street anymore. In fact, I'm not sure when the last time was I saw Julie. But that episode keeps haunting me.

Earlier today, while working hard on a project, Michael proclaimed he was hungry and without pause said 'I feel like I need cookies.' (need being the optimum word here) We had nothing in the house that was both a snack and sweet, nothing that resembled cookies, so I decided I could just bake some. I've done this a thousand times before, so the recipe is well etched in my memory. However, the scene with Julie and the cookies, came back almost immediately. But this time, the phrase that accompanied it was 'socially inept.' Seems a bit harsh, wouldn't you say? But there must have been a reason it spilled out of my consciousness so easily. As I reflected on those words, I decided that in this present day, to share a plate of cookies, or anything really, with a neighbor, co-worker, family is totally within my nature.

At that time, it was also in my nature but it looked different. I could have someone come to my house, we could make cookies, or a meal, and of course we would share it together. At that time, being a part of a sequestered church society that we were, sharing didn't exist outside our home, except with other family members or church friends. Sharing with a neighbor, well, we didn't do that. The larger commission was to serve your neighbor,because you had to, you were supposed to, and it would give the appearance of humility. You would do things for them. You would share things with them, as in, give things to them. You would sacrifice and give of your time and effort.  But the sharing of a moment to enjoy each others company, over a plate of cookies, was awkward, as we were supposed to be in the world, but not part of it.

All that did was create people who were socially inept. Truly, why was I afraid to think that my neighbor might actually want to spend time with me? And if she did, what was wrong with that? I don't know. I still can't really explain it. It should never have been awkward. I wish that I had been a more individual thinker, someone who thought about (and subsequently did) what was right, in spite of what you heard over and over each week in church.  But the fact that I chose to believe so strongly that the church was right, that everything it taught was gospel, that our only close friends had to be in the church, created this void in my social life, my personality, my being a good neighbor, my need to be an individual and stifled my ability to do life with others around me. I am indeed ashamed to think that this was the way life was. It wasn't normal then, and it surely wouldn't be normal today. For us to think that the world around us or our neighbors had nothing to teach us, to give us or share with us, was completely self-centered and now, embarrassing. I think perhaps the lesson is obvious. It's. not. all. about. me.

These days, I crave sitting around with friends and sharing what's going on in everyone's life. I am no better, I can't elevate myself above them, and I'm not keeping score any longer. That is the norm. That is what feels good. That is what heals the soul when it's wounded, broken or hurt. It's what we all deserve and long for as humans. It would even be better, if we all brought a plate of cookies to share. But then, it's not about the cookies. It never really was.