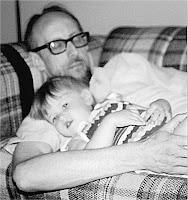 Hearing about Ron, my children's Grandfather and my previous father-in-law, having a stroke this past Thursday, the time has been marked as one of those. The news seemed abrupt, because these things are never expected. And that one single event has opened up the gate for memories, conversations, flashbacks and a lot of tears. Like when other loved ones died. My Grandmother, who I remember being especially close to, died of cancer. I was in Jr High. I remember my Grandpa telling me not to cry, so I choked back the tears. I wished I had cried. Or when my Grandpa died, after my kids were born, I was so far away and had been sick, so I couldn't attend the funeral. I wished I had gone. Or when my sister-in-law Linda passed away a few years ago from a brain tumor. It was a blessing to be there and share that moment with her family. I grew from the experience.

But there are other great recent memories of Ron. Many of them are of him with Sara and Chris. He was a wonderful Grandfather to them and the other grandchildren and they all loved him. Many are of him with the family. He was very respected and loved as a father. A few are of him with his own brothers. He was the oldest. Some are of his 50th wedding anniversary a few years ago. He and his wife, Sandi, loved each other and were very devoted to one another.

One tender memory I'll never forget was something he said to me. Standing in the kitchen at my sister-in-laws house, before a family dinner, Ron and Sandi walked in and began greeting everyone. As I was getting myself a drink, Ron came over, said hi and gave me a hug. He looked me in the eyes and said "wow, that's it." I said, "what's it?" And he replied, "the love of God, that's what I see when I look in your eyes. I know what that is now."  At first, I was flattered at the compliment, but I realized that what was significant was what had happened inside of Ron, not necessarily my eyes. Ron had just come from church and said he had heard a great sermon. What I saw was God had reached in and touched a part of his heart, awakened it at that moment and I believe he felt loved by God through whatever he saw in my eyes. He just had this look of a little child who felt happy to be loved. It was so sweet. 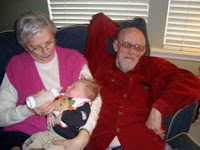 I know that my children have memories they will carry with them through their life and pass on to their children. In fact, Ron even had a chance to spend time with his Great- Grandson Wyatt. Four generations, one began in 1930, the last in 2009. Each one was truly blessed to have him in their life, and so was I. He was gracious, fun-loving, tender and kind. Good-bye Ron. I will miss you, too.
No comments: