The Young and The Old

This chapter of my blog is about the bittersweet moments in a day. It's also about all things young and all things old, because everything fits in one of the two. And it's also about the fact that emotional stuff is the hardest thing in life to  walk through. Like it or not, some days are filled with emotional challenges and each one leaves a direct physical imprint on our very being, on our heart and on our soul.

For the past six days I was in Chicago with my son, Chris and daughter, Sara and her son, Wyatt. There are no better moments than sitting watching a  2-1/2 year old play, innocently, without inhibition and full of life and spirit. 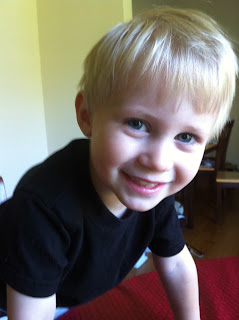 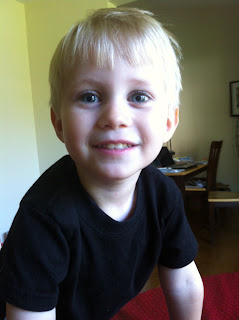 Each time he smiled, or looked at me with those big beautiful blue eyes, I just melted into a pliable, mushable blob of squishy-heart feelings. 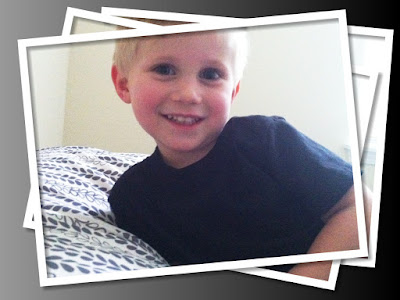 Once as he was going down for a nap, he asked me to lay on the bed with him so we could talk. Then as we laid our heads on the pillow, he turned towards me, just staring into my eyes, smiling. In my mind, I was hoping he was thinking how awesome it was that I was there and that I was special to him because I was his flesh and blood Gramma Debbie. There's something familiar within us that allows that genetic connection to be stronger than anything else. Come to think of it, I'm sure he must have been thinking that. At one point he reached over an put his hand in mine as if to say, let's connect. I may be projecting but I do believe we connected on some spiritual level, and there was definitely some bonding happening. 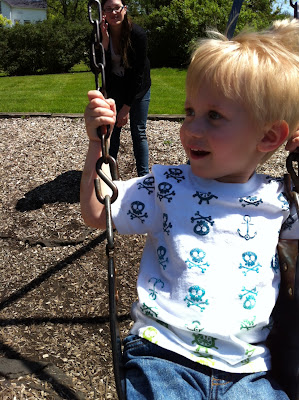 It was amazing to see my daughter be his mommie. How precious it is to be in the moments of her being the loving, tender, caring, nurturing mom, the ones in which I was immediately re-winding the clock, and emotions, to when she was 2-1/2. Many of his mannerisms, movements, actions, facial expressions and laughter reminded me so much of her, that the emotions I felt when she was that age came right back to the front of my spirit. She was being the princess I knew she would be and she was certainly living up to her name. She is a most dedicated, hardworking, give-it-everything you've got kind of mom. He is the luckiest kid in the world and I pray that he grows up to love and respect her the way a little child loves and respects the primary care-giver in his formative years. She deserves that. I'm very proud of her for being true to who she is. 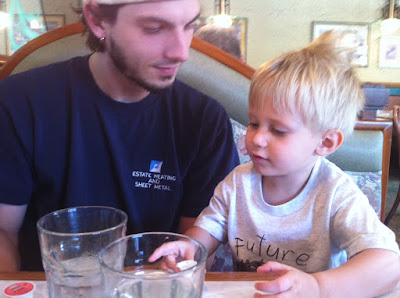 My son's work schedule was a bit off our social schedule, but we made time every day to see him and spend time together. Most of those times were in the morning, having breakfast and playing with Wyatt, who absolutely adores his Unca Chris. Those testosterone infused moments were simply adorable to watch as this little 2-1/2 year old became a football throwing, soccer ball kicking, dinosaur growling, rough and tumble boy. So flipping cute! Chris was the patient uncle, showing him how to do everything, sharing his oatmeal everyday, whisking him up if a meltdown over anything was about to happen, diverting his attention to something else, loving him as only his nearest and dearest uncle could. I wondered if somewhere in the back of Chris' mind he was praying for a little boy he could call his own. Wyatt's middle name is Christopher, after his uncle. That's truly special. I'm very proud of him for being true to who he is. 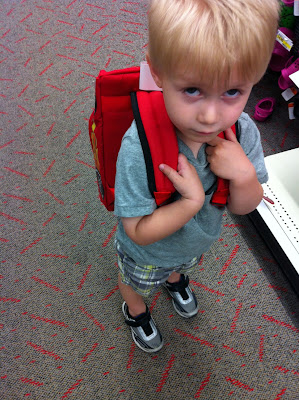 Fast forward to day six. I dreaded this day, for no matter how old or mature I supposedly am becoming, goodbyes just suck. I have massive separation anxiety just thinking about the hugs goodbye, the last words spoken, the last glance as one or the other of us drives off in the car, or walks into the airport revolving door. And every time I ask myself, what is wrong with this picture? It isn't supposed to be this way. We are supposed to do life together, closer, not a two hour drive to the airport and three hours on a plane apart. It's just not the way our hearts were meant to function. Sara and I said goodbye in the morning, Chris later in the morning and Wyatt in the afternoon.

As I dropped him off at Sara's best friend's house to wait for her to get home from work, I cried getting him out of the car. He was sound asleep, he didn't even wake up when I put him down inside. I didn't really get to tell him goodbye, but I sure told him I loved him enough when we were together. In an I'm-missing-you-already kind of way, I hope he walked down the stairs this morning looking for me and wondered where I was. I hope we can talk soon just so I can hear that little voice. Thank goodness for the dozen or more little video vignettes I captured on my cell phone. I've already watched them so many times. 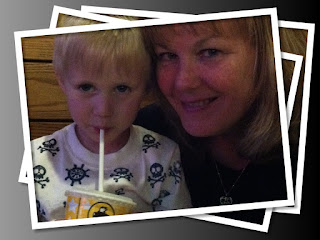 As this little boy is just starting his life in a most precious way, and all the bittersweet moments that surrounded my visit, I return home to a busy day of work, buried in emails from while I was gone. My thoughts were so focused on getting the work done that my spirit didn't feel the passing of someone near and dear to my heart who was almost 98 years old. I just found out that my Grandma Dahlia Booth passed away early this morning. On Mothers Day I had a teary conversation with my mom, who informed me that her vitals were going down and that her days were numbered. Three days later, she's gone. Just like that. Softly, slowly. Her kind life was over. 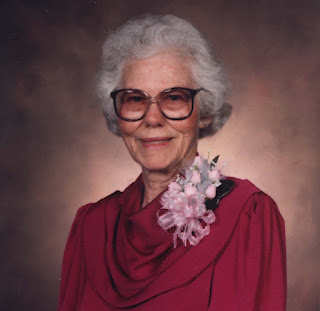 My Grandma had lots and lots of grandchildren. Having had ten children of her own, our family was large. One-on-one time with Grandma was few and far between, but she loved each of us and we knew it. She grew up in Alabama and I always thought she had an air of a Southern Belle in her spirit. She wore cashmere, always had her hair done, went to church every week and was very religious in taking care of herself. When I was in high school I believe, she had a heart attack. This pushed her on a life long regimen of extreme self care. 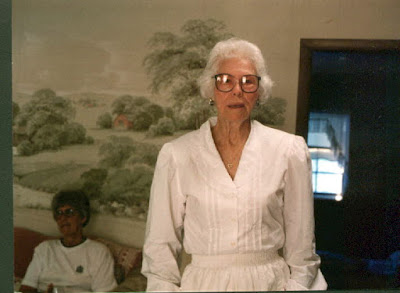 I've observed as long as I've known her that everyone around her took care of her, they gave her tremendous respect, and served her in any way they could. My mother was one of those in particular. Her relationship with her mom was very close, they talked about all sorts of things, they went shopping together, she always took her to appointments and other places. My mom served her mom. She gave her an abundance of respect and care.  What an example she has been through these years. 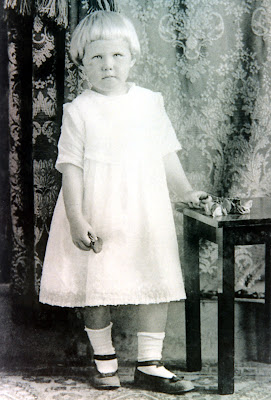 One of the earliest memories I have of my Grandmother was when my sister was born. I didn't know it at the time, I was only 3. But I stayed with her while my mom was in the hospital. She took me to see a movie, Island of the Blue Dolphins. I still remember it. She then took me to the hospital parking lot so I could wave to my mom through the window and she told me to ask her what did she have up there. A baby sister was the answer. I also remember that on one particular Valentines Day, she gave me a little handkerchief with hearts on it. I have cherished that little gift, it was very special. Later I remember that each year she and her husband would go to Mardi Gras, fish fries every Friday night at the VFW, and go to the World's Fair where ever they were. She loved traveling and seeing the sights. Throughout her whole life, she always had a southern accent. She was quite a Grandma, as Grandma's go. At her 90th birthday, we had a big party, with cake, and balloons, and a meal and showed a PowerPoint of her life, celebrating her and all that she had done. The early and middle part of her life wasn't easy, but she endured it all, persisted in moving forward, and lived nearly 98 years. I am proud of her for being who she was. I loved her and I will miss her. 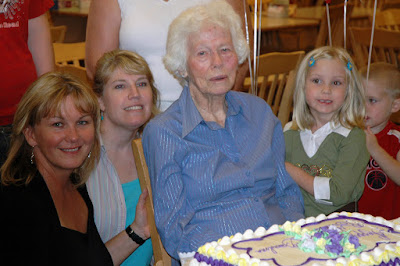 Life isn't all a bowl of cherries. It's mixed with enough stress-inducing events, episodes and scenarios that it can make you think you won't make it sane even one more day. It's filled with intensely emotional moments, many of which are bittersweet, each of which provide character and framework to our existence in this life. Rather than run from it, just walk through it, but keep going, don't stop. Winston Churchill said once that if you are going through hell....keep going. It doesn't have to defeat you. Even though I feel I could succumb from separation anxiety, I allow myself to cry, get it all out, tell someone I'm sad and that this is hard. Being able to admit that I don't have to be strong and that crying isn't a sign of weakness, makes it easier to stop in the moment, feel it, then keep going.

So as one life ends and another begins, thus goes the cycle of life. Maybe one day there will be a formula for handling either better than the day before. I wish that Grandma could have met Wyatt, I think they would have hit it off. Even with 90+ years between them, I'm sure their spirits would have met in a very familiar place - love, joy, happiness. 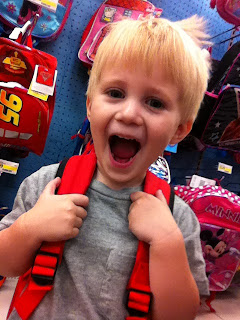