We've been in our house for a year and 10 months. The way time passes, it seems like yesterday we were moving in, unpacking boxes and figuring out how to make this new house our home. We were extremely fortunate in every way, and feel blessed beyond our wildest dreams, to even be able to find the house, buy the house, and move in when we did. Each month that passes, it feels a little more like our sanctuary. But not without some intentionality however. A home should reflect your own personality, your own inner feelings, your own spirit. It would be extremely difficult for me to move into a home, that someone else had decorated, painted, put their heart and soul into and find my spirit could rest there. I feel blessed to have started with a clean canvas in this home. There's something about starting fresh, with everything clean, and new. It's easier to call it your own.

As so many stories go, the previous owners had to vacate because of a foreclosure situation. Sad for them, but a blessing for us. We didn't know them, but it seems our neighbors did. Apparently the older gentleman who lived here with his wife, was "quite the character." Several have expressed their joy of having us in the house, they love what we've done with the landscaping and this past week, someone stopped to say they loved what we did with the front entryway to our house. The previous owners didn't actually paint anything inside or outside the house. It was just as the builders had left it. So, since we've moved in, there have been some dramatic changes. All for the better.

This past year we have begun to intentionally consider what we would like our home to feel like when we walk in. And what fun it has been snagging pictures from everywhere we can, (thank you Pinterest and facebook and all the blogs), processing which elements we love from those pictures and trying to incorporate the details into our own home. The latest project was redoing our front entryway. For months we labored over what we should do, the hardest being a decision on colors. So, as fate would have it, I happen to cross paths with a designer and decorator, named Abby with A Delightful Design, http://www.adelightfuldesign.com, who lives in Michigan. With each blog that I read and boards of room designs she posted, I felt a kinship to the style and creativity that Abby has. So, I approached her after reading that she wanted people to submit their front door pictures and she would give a quick design. This was a huge relief to me (and there was jumping for joy), since we were basically spinning on what to do and had no solid ideas.

This is the photo that I submitted to her. It was our front door, as is, with the original paint and tape still stuck on from the notices that were previously on the door. Basically, it was very blah. Don't get me wrong, it wasn't that bad, but the shutters were a darker blue and the two really didn't match. I sent Abby another picture that had the shutters so she could see what we were working with. 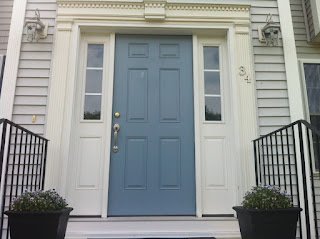 Then, she sent me a link to this picture and pinned it to my Pinterest board. Being an extremely visual person, I immediately saw her vision and thought it would be perfect. 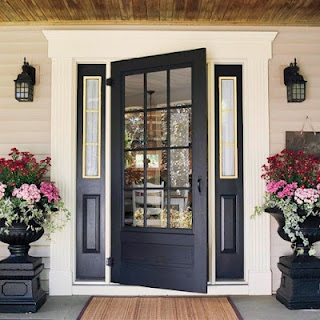 Little did I know just how perfect it would be. She sent me the details about the paint colors I could choose from, options that included painting the shutters and an option that included leaving them the way they were. Of course, we wanted to get the most for our time and energy, so we opted for not repainting the shutters and we went with Benjamin Moore Hale Navy, HC-154. Our house is a light grey (even though in the picture it looks light blue) and this was a beautiful combination of navy blue and dark grey.

I was a little nervous about painting with such a dark color, but being the adventurous ones we are, we forged ahead with getting it done. As we started to paint, we realized that the color we were using was the exact same color as the shutters. And we just marvelled at the fact that without ever having seen the house in person, and only from cell-phone pictures that really didn't do it justice, she matched them perfectly! Yes, she is that good! 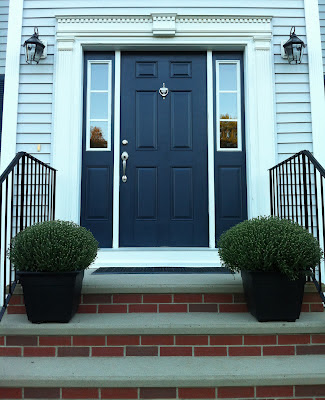 So, the front doorway, with the side windows panels were painted; we repainted the black iron rails on either side, as well as the outside lights a glossy black. We also added new locks and the door knocker that we received when we closed on our house. It's been waiting to go on the door all this time!
It only took an afternoon to get it done, but the results were amazing. So good, in fact, that the next day, I painted the outside entrance door to the garage, (inside and outside) and the door from the garage to the basement. What a difference. Those two were previously white. It's easier to opt for finding more uses for the same color when I buy an entire gallon and could have gotten by with a quart. And now that I think about it, I used my Living Social coupon for the paint store, so I even got the paint for half the normal cost. Such a deal. 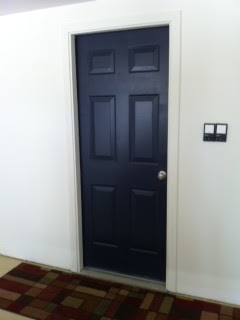 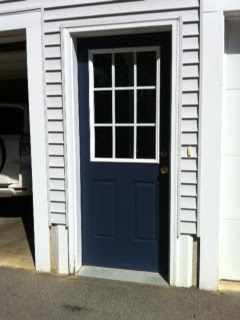 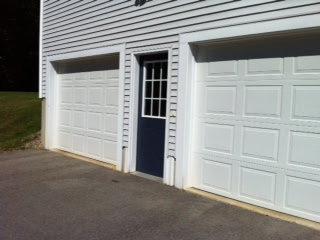 ﻿﻿﻿﻿﻿﻿﻿﻿So, thank you Abby, for the direction. We never could have done it without you! We love the results and even the neighbors think it was a beautiful change. Just one more thing we've done to make our house our home. I love things that are simple that make simple changes. But, sometimes the obvious isn't so obvious. I would not hesitate to work with Abby again, in fact, we are looking forward to getting some help on other rooms in our home in the very, very near future. I can't wait for the transformation that is just around the corner! And, as usual, pictures and a blog will follow.