The last thing I expected was for adult women to be crying. But here they were, standing in front of me, crying. It wasn’t a reaction I could have anticipated that morning. And it has caused me to wade around in a sea of ideas for the possible reasons that this could have happened.  I wanted to make certain that if this was a good thing I could explain it and possibly use this newly learned information in the future. On the other hand, if it was a bad thing, I wanted to be sensitive to where these women were coming from and not make an issue of the wrong things. Either way, this wasn’t something I had contemplated before now.

Recently, I was asked to participate in a book signing at a convention for Moms of Twins and More.  This is an annual event, held in many locations, where moms of multiples can retreat, reconnect and relax with other moms whose life has been transformed simply by giving birth to two babies, or more, at the same time. They are part of a special club, or association or group that the rest of us won’t understand. We have our own truly-blessed birth moments when our children were born. Each one is unique, special and unexplainably captivating. Yet, there’s something disproportionately unique about giving birth to two or more. I can’t explain it, having not ever done it. But all of these moms lived it. For them, this weekend represented a lot. A chance to take a breath and actually exhale, a chance to eat a meal uninterrupted, a chance to sleep through the night, a chance to have full conversations with friends. In other words, being at a hotel for two nights, without kids, was a super-magnified, highly intense and emotionally charged experience. It takes more than one or two nights to decompress from the normal day to day stresses. But here they were, making every heart felt attempt to put themselves first, even if it was only for a few minutes.

Interject a small section in the lobby where just four people were there to share their “goods.” On one long table a business owner had spread out her entire inventory of jewelry, i.e. rings, bracelets, and more charms than I knew existed. Her table had the most visitors. (I was somewhat jealous and decided next time I needed to have jewelry, too.) Her jewelry wasn’t cheap either. But because she had everything “twins,” everyone wanted one. There was another table with a pantry of health food and samples. She also had a steady stream of lookers and tasters. The next table was a line of personal lotions, perfumes and lovely things for the body. Lots of moms were testing lotions on the back of their hands, lost in the smells and feelings invoked by such sweet smoothness. The next table, on the end, was mine. There we had displayed my children’s book “As I Grow Up and You Grow Down.” It was completely different than the other tables, but fit in with the idea of moms, kids, and even the grandma’s who were attending, and had been for many years, because they were moms of multiples, too. I was super happy to be there. A good friend of mine, who is helping me promote my book, helped set up and get things going. It was a blast. 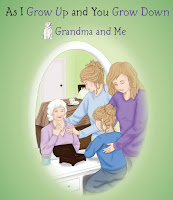 When I wrote the book, my focus was on the relationships that grandchildren have with Grandparents. They make an indelible imprint on the life of a little one, in between the moments they’re fully involved in spoiling them. I was hoping it could be a conversation piece adults would use to teach children that these relationships are special and to anticipate making memories with them for a lifetime. The underlying theme is that Grandparents model values that will be passed on, ultimately teaching little ones to do good for others as well as giving back to the Grandparents as they are aging or “growing down.” There is a strong message for children, but this week, I’ve had to think of other messages this simple, thought-provoking book has created. The surprise for me was the reaction of women, moms and grandmothers, standing at the table, reading this book. Some read it and smiled, some read it and tears began to stream down their face. Some read a few pages, abruptly closed it and backed away from the table exclaiming, “I just can’t read this right now.” What? It’s just a simple book about grandchildren and a grandmother. What’s so complicated about that? What’s so emotionally complicated about that? I caught myself intensely observing these reactions, realizing there’s more to their stories and to this story than even I know.

I decided to start with what I did know. What about my relationship with my grandparents would possibly invoke an emotional reaction to a simple story? I certainly didn’t have any surface while writing the book so this is newly explored territory. But if I think long enough, I can come up with some. They aren’t as emotionally charged as they once might have been, but the potential is there and even as I think of them, tears well up just a little. Like the time my grandmother was sick and dying of cancer. I wasn’t allowed to see her near the end of her life. And what I really wanted was to be with her, talk to her, and sit next to her before she passed away. I was still in elementary school. I didn’t want to lose my grandmother that actually made me feel loved. I didn’t feel her presence again until about 40 years later, standing in a church service, my parents next to me, singing a hymn my grandmother would sometimes play on the piano just because I asked.

Or another time when my other grandmother made a comment about how I was sitting and how my feet were turned a certain way. She said I had “pigeon toes.” Really I didn’t. But the fact that out of all the things about me she could have noticed, she chose the “pigeon toes,” made me feel really small, insignificant and like there was something wrong with me. It wasn’t a horrible comment but to a 12 year old already having self-image issues, it didn’t endear her to me at all. I’ve long since gotten over the pigeon-toes-something-is-wrong-with-me feeling, and grew to love my grandmother, who is now 97. It’s amazing that her life has been so long. I put her in the category of true Southern Belle, who has seen a lot of change in her lifetime.
If I shift a bit to seeing my own children with their grandparents, there is emotion attached to a few memories. Like the time I had to watch my son, Chris, hear his grandpa say he wasn’t interested in seeing him play basketball sinply because he didn't care for basketball and didn’t want to show up for a game. Or the time when his other grandpa didn’t show up for his eight grade or high school graduation. He had tears over that for quite some time. This is obviously something he will have to process (or maybe already has), but at the time, empathy caused me to feel strong emotions because I could see what was missing for him in his relationship with them. It could have been so much richer; they could have had so many more opportunities to share moments together. Along the same feelings, I remember driving away from a visit with my sister, her family and my parents. My daughter Sara sitting in the back seat, looked out the window as I backed out of the driveway, her little hand waving and said in her soft sweet voice “bye Grandma, I love you.” Of course, my mom couldn’t hear this, but I heard it and wept for miles as we started on the long drive home. It resonated with me because at that time I had difficulty saying “I love you” to my parents. Not remembering it said to me as I was growing up, I realized in that moment that a child has very strong feelings for parents and grandparents, and those feelings should be freely expressed. I could not come up with memories of my grandparents saying it to me either. Talking about love evokes tender, yet powerful emotions. But some neglect those three significant little words, which said together in one sentence, become the most power statement ever spoken.
I guess that for some, reading As I Grow Up and You Grow Down could trigger memories similar to these. Some probably have memories that extend far beyond on both ends of the spectrum when it comes to their relationship with their Grandparents. But what I love the most is that emotions are a part of who we are, what we’ve experienced, and how we’ve walked through this life. Emotions are not bound by time, they can make quantum leaps into the present from years ago, from moments past, through decades of joy and happiness or pain and sorrow. Sitting with them for a time, allowing them to merge with our more experienced, more mature, more grown up self, can result in all kinds of reconciliation where that needs to happen, forgiveness where that needs to be given, love where that needs to grow. The memories can be just that - memories. They can touch our present reality, but they can only remain with our permission. Our older, wiser self knows better now how to care for us and will take those emotions and memories and catalog them in the exact right place and time. The security of that is we know they are there and they can’t affect us any more unless we need them to.
So to the Moms of Twins and More, I hope you’re doing ok. I hope the moments of tears you felt were tears of joy not tears of sadness, tears of happiness and love, not tears of regret or pain. But either way, know that they were noticed and they matter.
No comments: