We have been in our home for two weeks already. In between shovelling out of snowstorms that have been pounding the area, there are boxes in each room that need to still be unpacked, window coverings that need to be hung, books that need to be put on the shelves and clothes that need to be put away. Just as we were getting enough done to be somewhat functional, four of our five children came to visit, along with our granddaughter, Lily. We have been overwhelmed and blown away by their presence, energy, laughter and joy. We didn't even notice or remember that we still have lots to do to be organized and efficient in our new space. Our plans to have a place for each one to sleep were successful, we had ample transportation and the menu selections worked out great. We ate out a couple too many times, but it didn't matter, we were together.
As much as we marveled at the fact that we were together as a family, we still marvel at the absolute miracle that we are in this house at all. If there was ever a point to belabor, it would be the one about how God is just amazingly God and lately we've been reassured that we still matter to Him. Throughout the process for this home, it was as if we had stepped aside and watched Him manage the entire process, down to the last detail.


The last half of the year, we had scoured the countryside and the internet, looking for a home in this area. We discovered that there was more for the money in New Hampshire, so our focus was somewhere just north of the border. We looked at homes in many different price ranges, several different styles and many locations. We even made offers on several of them, only to have our offer be turned down for one reason or another. Usually it was because someone else had a better one. It just didn't seem to go our way, and it was frustrating looking at house after house, making offers and giving a little of our emotion and heart to the possibility of being able to live there. We would leave from a visit and almost immediately begin to imagine where all of our furniture would go, how we could use the space, and what we liked or didn't like about it the most. Only to have our dreams dashed after making the offer. So, after months of that process, I make a conscience decision to NOT look at anymore homes, any internet listings or emails regarding any homes anywhere. It was not worth the emotional effort. I was too exhausted from the process.

Of course, we started the process in prayer, making sure that we wanted to stay in this area, but really wanting to be guided to our next destination. I decided that if God wanted us to have a home, He was going to have to make that clear, show us and practically hand it to us on a platter. It was incredibly freeing to not be looking. I was, after all, content with where we were, realizing that it would be temporary and that someday we would find something.One night while Michael and I were working at our desks in the office, he wanted me to take a look at a listing that he had received for a home. I said, "Hmmm, no thanks" and kept working. Didn't even faze me, especially since that was what he did many nights. But he scheduled with the listing realtor to see the house just a few days later. I was willing, but emotionally removed.

As we drove up into the neighborhood, I began to realize this was no ordinary listing. As we pulled into the driveway, I was totally blown away. He had chosen this one for us? Wow. I liked it! Still cautiously optimistic, we walked through the front door and both said oh my gosh! We hurriedly looked through the house and somewhere halfway down the stairs back to the main floor, we both said, "This is it." We told the realtor we wanted to make the offer.

What was interesting about this house is that it was a foreclosure. We had looked at many in the past, only to be discouraged about the amount of destruction that happens when a family has to move out of their home because of a foreclosure situation. Some homes we walked through we could feel the anger, pain and sadness of the family as they realized they had to give the house over to the bank. Everything that could be removed from the house was, including toilets, light fixtures, doors, etc. It was really sad. We respected the history but weren't sure they were for us in that condition. This home however, the complete opposite. You would never know it was a foreclosure situation. The house was immaculate. Not even a grain of sand on the floor or a smudge on the window. Everything worked, all the fixtures were there, no holes in the wall - it looked great. We felt such a positive energy and spirit in the home and that was refreshing.


Over the course of a week or so, going through the financing process, we felt stronger and stronger that God wanted us to have this house, because of how we saw things playing out. The first things that were reviewed in this process were our credit scores. We've always had great credit scores but this time around, things had become "attached" that we were unaware of. Through the course of the investigation, our anxiety started to rise knowing these things could affect our ability to make this purchase. As we dug deeper into the information we found some real surprises and some mistakes. This is where we saw God just wave his hand and remove these as an obstacle. It would have been easy to let this stop the process, but persistence paid off and this list of “negatives” on our credit report were washed away.
We initially started the process with one finance company from a referral. After working with this individual for about 10 days, we were convinced that he wasn’t going to get this done for us. The stipulation in the purchase was that we must close by the end of December, 2010. If we couldn’t make that happen, thousands of dollars of incentives from the seller would just disappear from the deal and we would be stuck paying much more than we did. We worked tirelessly with this first company, only to realize that we weren’t going to make it. Through our first realtor, we came in contact with a branch manager from another finance company. Luckily, I had kept her contact information in the same folder, so on a whim, I gave her a call, explained the situation and she reassured me that they could get it done within our time frame. In their words, “this is where we shine.” That’s all I needed to hear.

This was about the middle of December. We had two weeks to get it done. What usually takes about 30-45 days, they accomplished in less than two weeks. Through the speed and efficiency of emails, all of the proper paperwork they needed was sent to them in one day. I had saved everything in a file from working with the first financial guy. The appraiser, who typically would be scheduled for two weeks later, was able to go out the next day. The home inspector, same response, almost immediately. The complete package getting to the underwriter, done without a glitch. The loan approval, done within days. The homeowners insurance policy, done in the same day. It seemed that whatever we needed, God provided with lightening speed. Even down to the day of closing, December 30th, the last detail of whether there was actual funding on that day for the loan, done by mid day. Our closing was on time. The team I worked with was absolutely stellar in their performance to get this done for us. We will never forget them, or the grace and mercy we received. Others around us were amazed at the efficiency and our ability to close within two weeks. Actually only 8 days, two of those were bank holidays. We walked away believing the only reason all this happened was that God wanted us to have this house. There was no other reason for absolutely everything to go so smoothly.
We feel blessed. Our prayers for stability and a place to land have been answered. I have to admit, it feels great! Once again, it’s amazing to see God work. With a wave of His hand, things can disappear or appear, be created or torn down, or be put into the exact place at the exact right moment. Only He has the power to move and control circumstances. When God wants something for our lives, there’s no stopping it. Through all that movement and chaos, clarity happens. I’ve learned the best place to watch is from a comfortable chair, with a cup of hot tea in hand, waiting to see what He’s going to do next. 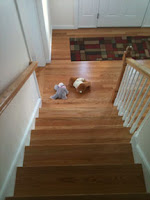 So, as I pick up the toys from Lily’s adventures throughout the house, take the sheets off the beds and wash a bundle of towels, memories we’ve already made in this house, float around with me, and it feels good. As I begin to pick up where we left off with the unpacking a couple weeks ago, even though I’m tired, there is still energy to get organized. The office needs to be put together; my clothes still need to be unpacked from the closet, but no big rush. It’ll get done. We still need to discuss paint colors, where we want pictures hung, and replacing the kitchen faucet for one I like better. But we’re here, and there’s no rush. That is a gift.
No comments: